How to break a large query into many small ones

I haven’t figured out the best way to do this yet so this is a work in progress.  I’m trying to document the process of taking a large query that joins many tables together and breaking it into a series of small queries that only join two tables at a time.  Today I finished this process on a query that ran for four hours and the eleven queries I broke it up into together ran for five minutes.  I did put a full and use_hash hint on one of the eleven queries.

Here is the process I followed:

The weird thing about this in that there is no guarantee that  joining tables in the order listed in the query will produce good results, but in this case it was much faster than running the entire query.  It was kind of a one legged tree: 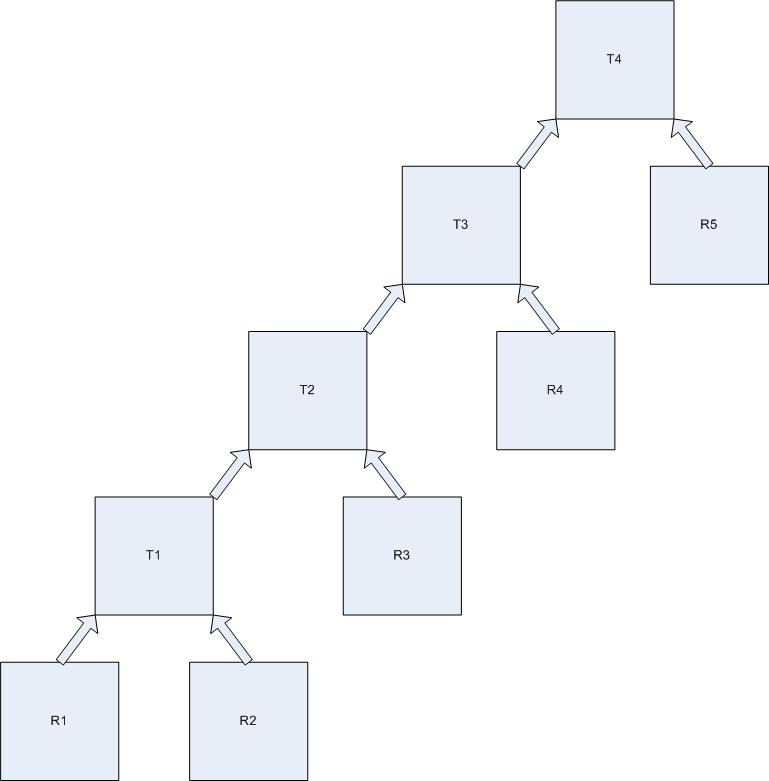 R1 through R5 represent my real tables from the original join.  Really there where twelve of these.

T1 through T4 represent the global temporaries created with each join.  In reality I had ten of these and the final output was inserted into a permanent table.

I don’t really know why breaking the query up into these small pieces was so effective but I do know that it would have taken a lot more work to try to make the bigger query run faster.  It took time to split it up but it wasn’t difficult if you know what I mean.  I was just tedious getting the list of column names edited together but that’s a lot easier than figuring out why the query with twelve tables joined together was taking four hours to run.